Today, on the day of the year we focus most on being thankful, we have lots to be thankful for. Of course, you know that because you’ve been following these NaBloPoMo posts in which the things we are thankful for have been celebrated.

But today, most of all, I am thankful for the Turkey Trot 5k, the culmination of my efforts to run. These efforts began last July, then I gave up when it got cold. I was prompted to run again to prepare for Mud on the Mountain and then held back again with a sprained knee/pulled hamstring. I was off running from June to August and had just enough time to train for a 5k by Thanksgiving. Train I did, through a lot of reasons to quit (most recently a sinus infection turned double ear infection turned virus). But today? Today was not for quitters.

Greg and I woke up early on a day off and headed into the city. We parked at the Rivers so we could get about a mile of warm-up in before the “race”. Our city is quite gorgeous, isn’t it? My mind started to get the best of me along this walk. We spent about 20 minutes in the parking lot across from the Hyatt and there were about 50 people in the lot, none of which “looked like me”. You see, apparently, when you run a 5k, you should look for people like you to start with so the competitive folks don’t get in your head. 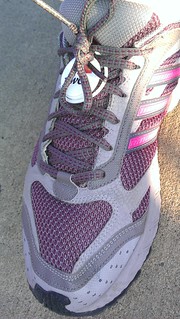 (My shoe was ready…but I am not sure I was!)

I wanted to back out, but we took some photos and headed to the 5k start line when they announced it was time for the 5-milers to line up. 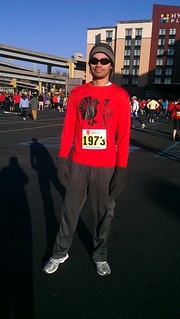 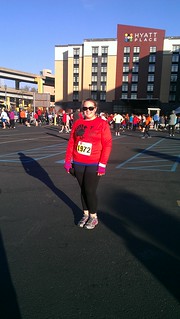 As we turned the corner…I realized…DANG! There were a LOT of runners there. Like almost 4000. We joined up about in the middle and I felt much more ready. I got rid of the mind games and realized what I had to do was in my heart.

The first half mile was slow going as we made it to the start and ran through some bottlenecks. I may or may not have said to Greg, “If one more BYSTANDER decides to run their mouth and say, ‘I can walk faster than they are running’, I am going to PUNCH them”. Ahem.

As we came to the 1 mile marker, the 5-mile head runners were crossing the Clemente Bridge. I had to clap for them, that pace had to be incredible.

As we were running toward the Point, Greg asked if I was doing okay. I didn’t feel right, my breathing felt labored. He might have asked, “Are you going to die?” and I might have answered, “Maybe”. We were just about halfway in.

Then the mean part of the run happened. I called my amazing running mate and partner a bad name because he was pushing me to go faster, stronger. Well, you see, the race path makers must have thought it would be funny to put the halfway/turnaround at the top of a hill on the Boulevard of the Allies. This I didn’t like.

What I did like, however, was when we turned that corner and I saw what (looked like) 500 or more runners behind us. That made me feel a bit better.

As we ran through mile 2 and down hill (thank God!), I recognized a friend from college running, too. This motivated me so much that next thing I realized, it was time to run back up and across the Clemente Bridge. Here’s where I probably would have walked if I let the mind games win. I didn’t. I kept pushing.

Mile 3’s marker flew by, then I feel like we finished strong as Greg and I crossed the finish line together. Somehow, he still beat me by 1 second, but that’s ok.

We were by no means in the fastest runners, but we weren’t last, and that is an accomplishment for me, for sure. And yes, over 500 of 3,353 runners finished behind us. There were also about 30 others who finished behind me in my age group. First race? I will take that. 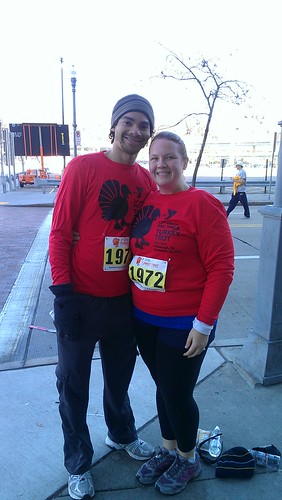 After we were done, we put in another mile-ish walk then I really wanted a hamburger. Forgive me, I haven’t had one in a long time and REALLY wanted protein. So, we visited McDonalds and I was quite thankful for the folks who had to work today. 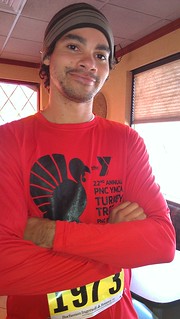 So today, I am so thankful for the Turkey Trot, the ability to run, the ability to run 3.1 (or 3.3 miles if you count the extra bits from the path to the start, thanks Runtastic for working today). For my husband and running partner for keeping me going. For my dietitian for convincing me I could do this. Thank you! 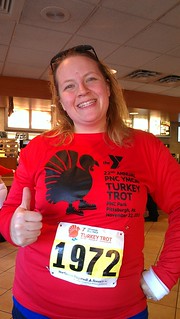 I earned my turkey (and burger) today! 🙂