Highlands has their kindergarteners start the first day with a “Get Acquainted Day” where half of the class attends an hour in the morning, the other in the afternoon. Arianna was excited to meet her teacher, see her classroom, and have her Daddy escort her to school. She picked out a full price outfit from The Children’s Place (I only ever shop with coupons, this is a big deal people) and took her annual first day photo. 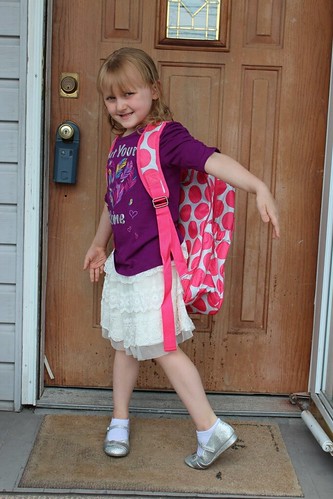 Admission time – Greg and I didn’t even know where her school was. Of course, we knew the name, just not the physical location. So, out came the GPS and off they went. (The school is 5 miles from our house in the opposite direction of my work – hopefully she’ll be cool with riding the bus.)

My first loves spent some time in the classroom, getting to know the teacher and the rules, filling out paperwork, and doing all the first day things moms are usually doing. Greg and Arianna don’t really look alike, and it’s rare for a dad to do these things, so I almost wish I’d been a fly on the wall to watch the interactions.

Sooner than I expected, she bounded back through the door and started telling me how happy she was to be in kindergarten, but that “it’s awkward not being six” – little does she know that most of her friends are five and will be for most of the year.

There was homework the first day, but my ‘lil artist breezed through it. She needed to draw a picture of how she felt about going to school – happy – and how her family felt – Dad and Mom overjoyed, ‘lil brother bawling. Evan is really struggling with this having to be a big boy thing – say a ‘lil prayer for Bubby that he’ll adjust easier than he has been this week.

Before bed (we’re now on a much earlier bedtime schedule), she set out clothes (no new ones because Mom just bought fall clothes and summer decided to return, oops) and kissed us goodnight. If I know my ‘lil nerd like I think I do, she dreamt of books and numbers, making friends, and arts and crafts.

Thursday morning, the whole family got up to celebrate her first “real” day – a half day – but the first time riding the bus and seeing all her new friends. Evan supported her by wearing her RAMS shirt and pausing for a photo by the door. 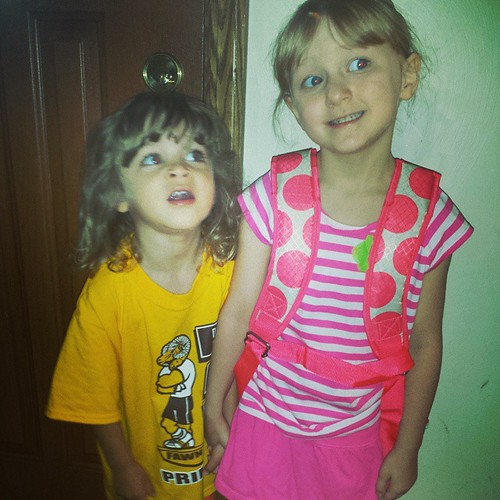 We walked to the bus stop – I was amazed at how many kids there are in our neighborhood and at the number of dads who brought their kids to the stop (go dads!!!). I wasn’t surprised that Arianna quickly went away from us and to a neighbor girl who is also starting kindergarten – taking her hand and being all up in her business about how excited she was to be going to school. The ‘lil girl is shy, I just pray Arianna doesn’t get the reputation for being too much and too friendly!

As her bus pulled up, there were no tears from her, dad, mom, or even ‘lil brother. I’ve known since this ‘lil girl was in my belly that she was a fighter, an independent girl on fire who is going to move mountains. I’m proud of her, and know that school is just the beginning of how she’s going to rock this world pink.

3 thoughts on “The First Days of Kindergarten”