Earlier today, I glanced down at  my knee and realized I still have several “active”, red bruises on my knees from this year’s Mud on the Mountain…which promptly reminded me I forgot to give you the breakdown of how it went this time around.

The Friday evening before, Greg and I headed up to Seven Springs to get a good night’s sleep. Luckily, one of us (him) looked at the weather and made sure we packed some long sleeve clothes. The temperature on Sunday for the Half Marathon had been perfect, low 70s, but the forecast was not looking swell for Mud on the Mountain…snow was even a possibility in the early morning.

We checked in to the hotel (which I wasn’t excited about–I do NOT like the rustic feel of the resort) and were told we were on the 10th floor, the top floor. When we got to the room, I could have jumped on the bed. The place was gorgeous, clearly renovated, and made me very happy. As much as I liked the room, it didn’t take much to convince me to go down to the swimming pool for a ‘lil bit. Greg, as usual, took an opportunity to dive (the number of pools we’ve been at that are deep enough for this could be counted on one hand). I had a first time experience of diving. Sure…it wasn’t beautiful, but it happened. When we got back to the room, we set out our clothes and got rest.

In the morning, my nerves were up. Maybe it’s because I kept going out on our porch and watching the Elite Runners come down the icy, snow hill to the finish line.

There really was no turning back, though, and we got dressed in our 2012 MOTM shirts and checked our bags and headed to the start line with a good 3 minutes to spare. 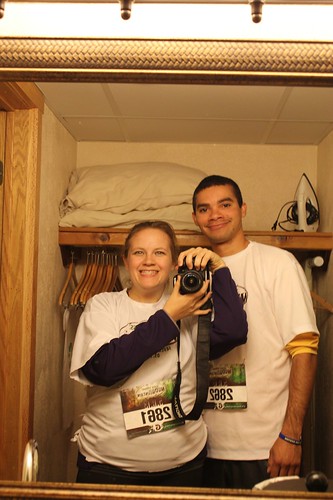 It was frigid, but not raining…until the exact moment of 10:30 as we crossed the start line.

This year, I actually jogged up part of the first hill and got to the top before a good 10 other people (versus being next to last the first time). And this is when the rain really mattered. Planning at the first obstacle was awful. We hit the back of the 10:15 wave trying to cross the first wall. The rain came down harder and the wind picked up. I stood shivering and decided I wasn’t doing the wall, wanted to keep moving. But, you see, this is very much a team event and I needed to wait for Greg to get his chance to climb the wall. He didn’t get to do so until after the 10:45 wave had been standing with us for about 15 minutes. So…calculate that. We essentially waited 30 minutes to cross one set of boards. Ugh.

By the time we got moving again, I really couldn’t move. There was so much mud this year, which is exactly what I wanted…but my legs were frozen. I warmed up a little and moved from the mud to the grass and then back again. My knees were not liking the mud, feet sliding left and right. At the cheese grater, Greg flew down the obstacle and I got a burst of energy and jumped into a fast lane, too. Little did we know the bottom of the grater was full of a few feet of cold water.

The next few miles were tough, but not unbearable. I loved that we actually had granite to scamper over for a good portion of the woods, and the added crawling obstacles were fun (until I hit my knee and had to crawl on my hip–ouch).

Greg was enjoying it, but I could tell I was holding him up. We got to an obstacle I know I couldn’t do–inclined monkey bars. Greg was incredible at this one. After that, it was waiting about 20 minutes at another wall. We traversed some more mud, I got mud and rocks places that never should (including some cuts), and we had some good laughs. There was one point I definitely sat down and said I was done, but my motivator kept me going.

And then…we hit the nail biter. The volunteer told me I couldn’t go in the side I picked, she wanted me to go on the easy side. I wasn’t having it, and powered through this one. It was a wall with itty bitty foot and hand holds. What I did not realize? The ground below got lower as we got to the end. Greg had gone through another one, and I could see him jump a good distance off the wall. I didn’t know what I was going to do, and an anxiety attack promptly ensued. I had to go to the other side of the wall to let others come through. My knees and hands shook. I cried. Greg eventually convinced me to jump into his arms. I told him what happened at the beginning, and I had to convince him not to go run his mouth. We moved on after my breathing returned to normal and a fellow runner tapped me on the back and said, “You got this”.

Our Trout Line strategy was to have me go on a line with other women my height while Greg went with taller guys. This worked well…until a man jumped on my line and was swaying it. I felt stretched so far that I couldn’t move. Tension released and I was able to finish it…only to be greeted with the need to pick up a log and walk up a ski slope. I took the equivalent of a twig and had to drop it at the top–my arms were jello. Greg made up for it and carried a log that was probably once a tree trunk.

Next was the final up-hill, marked with the 7-mile marker as we approached it. Apparently only 0.7 was left. I don’t believe this. That last hill kept going and going. The obstacles at the top weren’t crazy, but I was exhausted. We met up with one of my co-workers and her sister and started down the snow. I sat on my butt, lying down at one point, and froze. Mt. Everest wasn’t a bad climb this year, but my muscles were mush. As we descended this last part, we realized we had to hit some ice cold water before getting our medals.

A few photos, a banana, hard bagel, and watered down lemon lime Gatorade then off to hose off and get warm. This was not an easy task, considering my whole back side was near frostbite from my decision to sit versus try.

All in all, it hurt a bit, was physically and emotionally exhausting (more so than the Half). Would I do it again? Probably. Even if it was after running a half 6 days before? Maybe. We’ll see. I mean, this is definitely worth it: 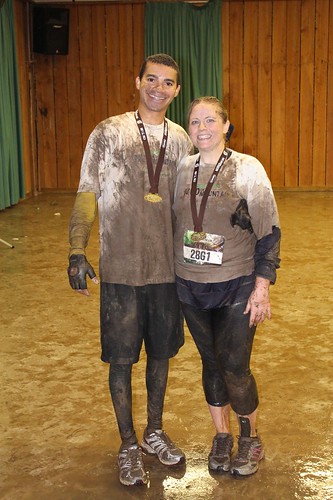