Today, I am sharing a local gem with you, Deer Lakes Park. We’ve been there many times before, but this last trip was an eye opener–there’s a secret playground that is hands-down the best in the area. (Thanks to my co-worker for sharing it with me!) This post will also be posted on South Hills Mom, a blog about kid-friendly resources in Pittsburgh’s South Hills. Head on over and say hello for me, ok?

My family is no stranger to Deer Lakes Park, an Allegheny County Park in Tarentum. (Okay, technically it’s a lot closer to West Deer than it is to Tarentum, where we live.) We’ve spent hours running around the ponds, searching for frogs and fish, and enjoying this playground:

The playground is just fine, there is a variety of equipment that the kids enjoy, but it’s pretty much just a standard playground. (I’ll admit, the mulch ground cover isn’t my favorite since the four of us typically wear flip flops.) Not shown is a spray park, but we’ve never taken the kids there because when it is open, it is quite busy.

When a co-worker told me about a “hidden” playground out in the picnic grove area, I was excited. When cousin E spent the day with us, we decided it would be the perfect day to burn some extra calories and have a picnic and playdate in the park.

That picture doesn’t do the park justice, but I’ll admit blogging about the day wasn’t at the top of my mind (sorry!). What is behind our picnic table is a park that has a rubberized ground cover, is accessible, and has sections for ages 2-5 and 5-12. Probably not surprising, our accident prone Evan fell while there, but it wasn’t on the rubber, just inches away. If he had fallen on the rubber, he likely would not have skinned his ‘lil knee. By accessible, I mean that you can get the entire way up to the top via a ramp that starts right at ground level. And the age levels are marked off by clear signs: 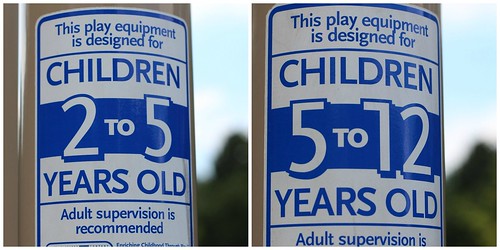 And the swings are even clearly marked as to what age they are for. We know this, because it helped us determine that Evan is a ‘lil peanut for sure: 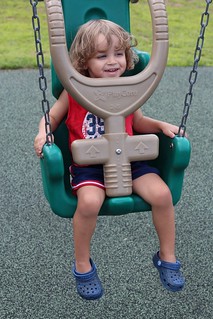 Beyond your “standard” swings, slides, and monkey bars, this playground has a rock climbing wall, spiders’ nest, bridge, fun mirrors, telescope, balance beams, “crocodile rock” swinging obstacle, and more. Greg may not have been the best role model and took on the playground as though it were an “American Ninja Warrior” course because the equipment was so fun. Arianna loved being a ‘lil daredevil and climbed to the top of anything and everything she could. E and Evan equally enjoyed the course, too. 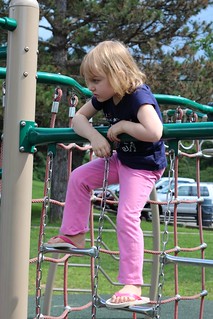 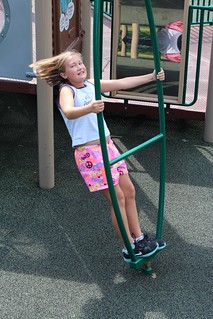 While I love the park, I feel that I would have hated it if Evan had been any younger (he’s a small 32 months). There are a few educational tic-tac-toe boards and artwork (like the American Sign Language Alphabet and “hello” in several languages) ; however, there are no parts geared toward under 2, including the swings.

Adults would appreciate the rubberized ground, but there’s not a track nearby. One other thing I didn’t love about it was the porta potty (never fun with a ‘lil one who is usually potty trained but has stress accidents). (To be fair, I think many parks have porta potties.)

All in all, Deer Lakes Park is definitely a gem that we’ll keep in our back pocket for nice days. Sure, it’s a bit out of the way, even for us; however, the kids (and adults) loved it. The ‘lil Burghers definitely give this portion of the park our seal of approval.

Navigating to the park wasn’t tough, but if you’re not from the area, it’s not the easiest to find. First, to get to Deer Lakes Park, you’d probably exit 28 at Creighton, then turn to the right and then left at the light by Sheetz. At the next light, Bailey Run Road, turn left and follow it out to a stop sign a few miles in. Take a left, then the park entrance is off on the right about a mile up that road. You’ll see the (original) playground on the right, then about a mile up the road on the left is the entrance to the grove area. Take it all the way back. All the way! At the last grove, down on the right, is THE playground. (Okay, talk about Pittsburgh directions!)

If you’re interested in more photos from our adventure, check out my set on Flickr–there were so many fun moments that I couldn’t include them all in this post.