*articles may contain affiliate links* This post is brought to you by THE RIDE.

It’s been a week since I got home from New York City, but I’m stuck in a New York State of Mind. It was refreshing to get some time away by myself – albeit blog work time – and to take in the city for the first time on my own without Greg. We talked about safety and security before I left, and one thing I promised was not to be out roaming around at night. That’s why I was really excited when I found the best way to experience NYC at night – taking a tour with THE RIDE!

You might remember that last year the whole ‘lil Burghers family took THE TOUR – the tamer, more family-friendly daytime option with The Ride. This trip was similar in that it was on the same type of bus (a $1.5 million double-decker bus turned into an entertainment stage) and took us through some of the same sights, but I laughed probably 10x more on THE RIDE (probably due to the more adult-geared humor).

The Ride: The Best Way to Experience NYC at Night

Not saying I was nervous to walk the streets of New York, but I did want to listen to Greg. I was traveling with my friend Rachel (a fellow blogger) and as we’re both moms, we agreed that roaming the streets alone probably wasn’t a grand idea. Instead, we roamed the streets in a comfy seat with air-conditioning blowing on us!

We started our 75-minute journey just outside of Times Square on 42nd street as the sun was setting over the city.  After we got introduced to our guides Jackie and Scott, we got to know “The Ride” a little better. (The bus is named THE RIDE.) 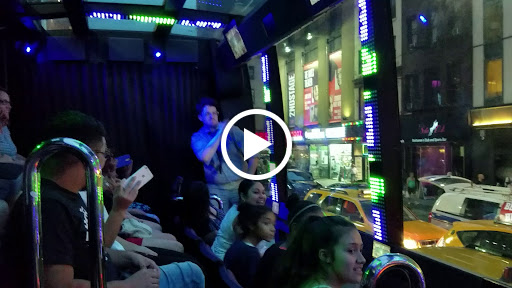 From our second-story street view, we got to experience the city above the hustle and bustle that started to take over. As the lights came up, the people came out! (We rode through Times Square twice and the first time it had just started to get crowded – but by the end of the ride it was jam packed!)

One of the skits we got to stop and watch was the ballerina – you’ve probably seen an ad for this experience with a dancer in daylight. But at night? Her skirt is lit up and she twirls around Columbus Circle. It was moving – and I’m not sure if it was the fact I finally was “relaxing”, but I cried!

Seeing Bryant Park, the Chyrsler Building, and the (in the distance) Freedom Tower lit up was pretty incredible, too!

With over 61.8 million visitors a year (20.6 million of them coming to NYC between Thanksgiving and New Years), there’s definitely more than one reason to visit. Taking on tourist attractions like the highly entertaining THE RIDE can also be educational. (For instance, I found out that M&M’s world is the most visited Times Square shop.)

Because of attractions like The Ride, you get a chance to “see it all” without worrying if you’re walking the right direction or putting our trust in an Uber. Who wants to celebrate New Years in Times Square? (Ok, I do, secretly.) If you’d rather not be all crowded, you can experience that right here on The Ride!

And you never know when you will become part of the show – Rachel and I got a rap shout-out during one of the stops!

Know Before You Go

Here are some logistics to keep in mind:

If I didn’t get you in a New York state of mind, maybe this last skit will help you make up your mind and check it out! 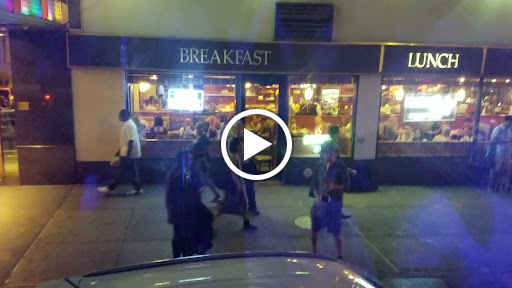 Have you been to NYC? What was your favorite thing to do? Did you take The Ride?

*articles may contain affiliate links* This post is brought to you by THE TOUR.

When we were in New York City last week, one of our musts was to take THE TOUR, a bus ride through town. As you’ll soon see, THE TOUR is not just any ol’ bus ride, but an adventure on a $1.5 million bus throughout New York City. We took all four kids (yes, including the twins!) and came up with 10 reasons you should take THE TOUR with your kids. Reason 1: NYC in the summer is hot and winter is cold. These extremes don’t really make for great sightseeing (just ask Evan who cried on our walk over because his neck got hot). Instead, schedule yourself 90-minutes on THE TOUR and get a break from the weather. This experience happens rain or shine (but not blizzards), so no need to plan around the forecast. Trust me, you’ll be glad you’re not on one of those double-decker buses (been there done that in DC, oh my!).

Reason 2: Your kids will be amazed that they are sitting sideways on a bus that is lit up like a Christmas tree AND talks to them. THE TOUR is powered by the buses used for THE RIDE. These beauties are $1.5 million and it shows. From stadium-style seating (don’t worry, these are nice, comfy seats + carpeted floors!) to multiple LED screens and lights that move along to sounds and music, this is one seriously fun bus. Of note, there are not seat belts on the bus, so Ava and Isla mostly stayed in our laps for the duration of the trip. This was no issue at all because they were thrilled to check out all the fun around them.

Reason 3: The Navigator, driver, and bus are extremely awesome. There’s really no other way to put it – but once you step on THE TOUR, you’ll immediately feel welcomed by the crew that is handling your trip. Our Navigator, Stina, was super personable and remembered things about the passengers on the trip (like that two parties were from Kansas City and another was from Ohio). She didn’t get thrown off by Isla’s occasional tears, either. Bernard, our driver, took some tight corners of the city like it was a walk in the park. And the bus (aka “THE RIDE”) has a fun personality, too! Note – do think ahead and have some cash for a tip. If you don’t have it, you’ll probably find yourself wishing you had. We were so glad we were prepared because they really impressed us!

Reason 4: 90 minutes is positively perfect for enjoying the city from a bus-level view. THE TOUR is part of THE RIDE, but we picked it over THE RIDE  because it was 15 minutes longer and a little more educational / family-friendly. (THE RIDE is recommended for 6+ while THE TOUR allows all ages.) And while our ‘lil ones do get a bit antsy after 10 minutes, we parents needed the break THE TOUR gave us. It gave us time to learn about NYC and not have to worry about who was going in what direction.

Reason 5: You’ll learn things you never knew you never knew…For instance, Arianna learned that you could get lost in Central Park because the sidewalks aren’t straight – they curve so that you can get lost and explore. And Evan learned that King Kong climbed the Empire State Building (and then he kept looking for him the rest of the day on all the towering buildings). I’d tell you more of the history lessons, but that’d ruin the surprise!

Reason 6: You might get to see the Naked Cowboy and not really have to explain because 10 seconds later you see game and TV characters and they don’t take the time to ask questions. Or maybe you’ll get a funny view like we did and then have to answer them all… Reason 7: You’ll get free advice on where to take the kids to lunch. Along the way (through 10 neighborhoods), we saw many different restaurant options. Stina (our Navigator) mentioned good things about some of them, but she also happened to point out a McDonald’s on Broadway that looked much more family-friendly than the one a few blocks over at Times Square did. (That’s where we had our lunch.)

Reason 8: There’s plenty of adult humor that will have you laughing your way through the day. As if seeing the Naked Cowboy wasn’t enough, we got laughs at Trump Tower (of course Fox News was there), looking at ads on Fifth Avenue, and the interactions with pedestrians (okay, other tourists – hint, they wave back). Reason 9: This isn’t your mama’s tour. It’s next generational, and really on point for the kids. You see, hear, and even feel the experience on THE TOUR. The kids were captivated, yet there were moments Greg and I looked at each other and knew that we had to get his dad on it ASAP because he grew up in Harlem and would connect with the way THE TOUR brings the past (and even future!) to the present.

Reason 10: Family memories will last a lifetime. Over a week later, the kids are still raving about their time on THE TOUR. We’ve got our own inside jokes and lines from Stina’s commentary on the city.  These aren’t things we’ll soon forget.

If you are visiting New York City, we highly recommend you take a trip on THE TOUR or THE RIDE. You can find out more information on their website, experiencetheride.com. Tickets for THE TOUR are $45 per person and experiences are most days at 10, 12, and 2.