It is the most wonderful time to check out Christmas lights, right? What makes it even better is when those lights are at one of the best family-friendly places in Pittsburgh! There are still three weekends to enjoy Kennywood’s Holiday Lights event!

Heralded as “Pittsburgh’s best wintertime family tradition”, Kennywood Park is open Fridays, Saturdays, and Sundays between now and Christmas, and nightly December 26-30 from 5 to 9 PM.

During these special hours, you and your family will enjoy some favorite rides, holiday music, hot chocolate to keep you warm, and of course an amazing light display! There will be light shows, photo opportunities (we LOVE the big tree), Santa, and Kenny!

Get Your Holiday Lights Tickets

Tickets are available at the gate, on Kennywood’s website or at your local Giant Eagle store. My readers can save by purchasing tickets here for just $13.99 each! (Children 3 and under are free. Not included in the ticket price is a $1 amusement tax and processing fee.)

We will be visiting soon, so make sure you watch for our adventures on Instagram.

Bonus! Stuff those stockings with deals on summer tickets to Kennywood and three other PA amusement parks by shopping here!

Founded as a recreational playground far away from the hustle, bustle and smog of Downtown, the idyllic site overlooking the Monongahela River has transformed over the past 12 decades into one of the world’s great amusement parks, featuring rides and attractions fit for all ages. Designated a National Historic Landmark in 1987, you’ll find three roller coasters that date back to the 1920s, each as fun as the day they opened nearly a century ago. Alongside those classic coasters come modern thrillers like Phantom’s Revenge, Exterminator and Sky Rocket. And opening Summer 2018, don’t miss Thomas Town™ at Kennywood. The second-largest permanent Thomas & Friends™ attraction in North America brings five new rides themed to the beloved children’s brand, plus live shows, an indoor play zone, and more.

This post is a collaboration with Kennywood Amusement Park. In exchange for sharing these deals with you, we’ll be taking the kids to their Holiday Lights. Thank you, Kennywood, for this opportunity!

One of my favorite memories as a kid was going to Kennywood for my Pappy’s Railroad picnic every summer. I can smell the Potato Patch fries and hear the shrieks from the Thunderbolt for miles.

If you are a Pittsburgher and you don’t have a Kennywood memory, it’s time we change that. The fun goes almost year-round with the traditional Amusement Park summer days leading into their fall festivals and Halloween-themed evenings right into the Holiday Lights experience (going on NOW!!!).

Through December 30, take the family to this iconic Pittsburgh park and enjoy lights, rides (including the 4-D theater, Kiddieland rides, and the Gingerbread Express), as well as holiday music during their Holiday Lights. (Greg and I went a few years ago and highly suggest hand warmers and layers. Splurge on the hot chocolate, you’ll be glad you did!)

With Black Friday right around the corner, it’s time to act on these deals (available now) including a special discount on their Holiday Lights admission. Here is what Kennywood has to offer, all of which you can purchase HERE.

Applicable fees not included. Purchase your tickets online to redeem these savings.

At our annual Kennywood picnic day, my dad did his tradition of bringing dollars for the duck and fish ponds. Apparently, one of our kids is a ‘lil lucky duck.

Because you see, all that they knew was “pick a duck, get a ‘lil stuffy prize”. 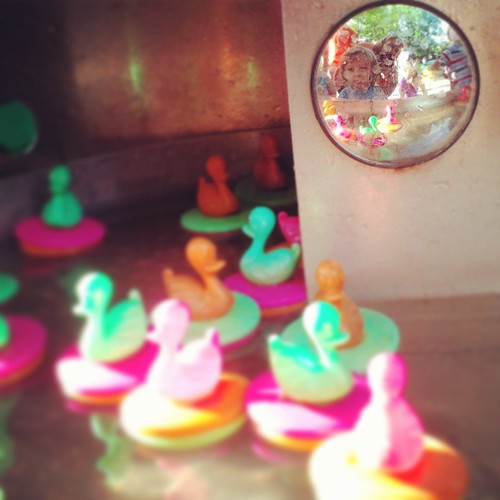 But, as you can see, the winner ducks DO exist.

And in case you’re wondering? Evan loves his ‘lil stuffies just fine. No tantrum (surprise). Instead of letting Pappy throw dollars into us trying to find a winner duck for him to get his own Kenny Kangaroo, he said, “It’s okay, Pappy. I love my friends, they are my friends!” Okay, we have us two ‘lil lucky ducks.

Last year when we went to Kennywood, our ‘lil girl rode a few rides, but was by no means brave. In May, she got a bit better, showing her ‘lil brother the ropes. This year, oh.my.gosh.

Two of her 2nd cousins are a year older than her, and I remembered them riding the Jack Rabbit last year. As we walked to KiddieLand, I decided to “just in case” see if she was tall enough. After measuring up, she kept telling me she was going to ride the big roller coaster. I didn’t believe it one bit.

She tore up KiddieLand and gave up Bingo to ride with the older kids. When we met back up, my cousin asked if she could ride the Jack Rabbit. Surprisingly, I said yes, but only if Greg would ride beside her and hold her tight. My stomach was full of knots.

We caravan’ed our way to the Jack Rabbit, and my nerves got worse. You see, I do NOT ride roller coasters. In high school, I sort of stood up on the Racers and when I attempted another coaster at Busch Gardens, it got stuck at the top of the first hill. Behind Idlewild’s wooden coaster and the Wild Mouse, I do not ride coasters. There is no convincing me, either. Anyways.

As they stood in line, she had to potty, so Greg handed her to me and I took her. She was so happy that I was letting her do this, and I had to ask her if she was really my child. Before we knew it, they were up in line and it was time for her to board. The whisking away to the car happened all too fast.

A family friend and I watched as our baby girls were swept away on the coaster. She had been there last year, as her E is in her 2nd year of riding. I literally paced back and forth, glad my parents were sitting with ‘lil Man (who, by the way, told me NO he is not riding the Jack Rabbit next year).

Before I knew it, they were back. She started run-dancing down the ramp to me, giggling. When I asked her if she liked it, she got all serious and said NO, reaching out for a hug…then exploded in giggles. T picked her up and off they went to laugh at their photos. Oy. My ‘lil girl is not so ‘lil anymore.

Sunday seemed like the perfect day for a trip to Kennywood, so off we went! The day was spent in Kiddieland, and we were surprised how ‘lil Man wasn’t as into it as we expected. A had an amazing time, but ‘lil Man was a bit scared to leave our side.

Take the Whip for instance. He was great when it whipped toward us, but started bawling as the Whip went away. It was a complete coaster of emotions for ‘lil Man.

And the Mouse Pounce and Crazy Trolley (which we rode with them) had him clinging to the bar for dear life.

Of course, he really liked playing with the ducks (until we had to walk away).

A was a ham, riding rides with no care in the world. One of her favorites was the motorcycles.

…enjoying a ride on the carousel at Kennywood.

As a kid, one of my favorite things was going to Kennywood for my grandfather’s Railroad picnics. I am so glad I get to share this fun with my “own” family as our kids make their own memories.