We – the members of The Pittsburgh Women’s Blogging Socity – are saddened and outraged and fed up that yet another one of our sisters in Pitttsburgh has lost her life to domestic violence. 33 year old Ka’Sandra Wade – mother, employee, daughter, student and so much more – was murdered by her ex who was also the father of her 7 year old son, Zaire. The situation is complicated and tragic and has generated an outcry from the community to push for better investigation of domestic violence allegations, stronger laws to protect women and more awareness on the part of the community.

Today, I am teaming up with my fellow Pittsburgh Women’s Blogging Society members and asking you a simple thing, to remember this woman, Ka’Sandra Wade. Remember it. 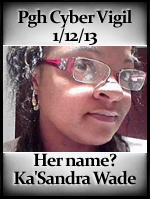 Why? For me. For all other women who have been victims of domestic violence, too scared to speak out, to get help, to get out. Ka’Sandra was a victim of domestic violence and we will not let her name be forgotten. I don’t really care what her ex’s name is, because I refuse to give focus and light to a man who hurt a woman. I refuse to let his name be the one that the headlines highlight (thank goodness for stories like this from the Post-Gazette that start with her name, not his). While I am sure his family is grieving, as well they should, I refuse to let his death get glory.

Why? For Kassandra Perkins. Yup, I bet you don’t know her name…she is the victim of the NFL player who made headlines for how much suffering his actions put on his team. Her memory should live on. We burned the names of the Sandy Hook teachers and children in our minds, this is the right thing. Remembering murders is not acceptable.

It’s with a heavy heart that I learned a young woman, a mother of a 7 year old, fell victim to a man’s rage. It makes me angry. It makes me sad. It makes me proud of my own strength. But it makes me aware that domestic violence is something society all too often shoves under the rug and ignores. For Ka’Sandra Wade, let’s not forget, let’s not ignore.

Today, Ka’Sandra‘s friends and family will hold a vigil for her, meanwhile ladies all across the city will blog about her. Let’s not remember her murderer. Let’s think of Zaire, her son. Let’s help the women we love get help (such as from the Women Center & Shelter of Pittsburgh and The Center for Victims).

But most of all?