Enter disclaimer text We love our copies of Happy Salmon so much that we can’t help but share the love. For the next seven days, you can enter our giveaway for a chance to win your own copy of this family game! 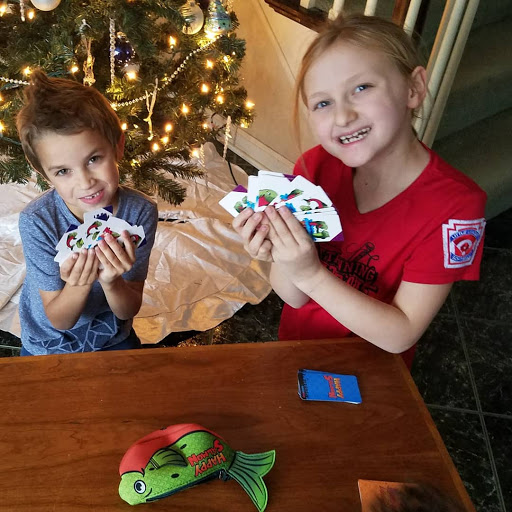 This giveaway runs until 12/20/17 for a copy of Happy Salmon. If you haven’t heard about this game yet or just want to hook one for yourself now, check out our Holiday Gift Guide for Games.

Have you seen our Instagram post about this game? Go check it out and tell us what you think!

Enter this Rafflecopter Giveaway –> and tell your friends!

We’ve got a closet full of games for family game nights. The options include board games, interactive team games, games to be played outside and cards. As we discover games that we love, we’ll be adding them here to our list of Family Game Night Options. The big kids will give their opinions on them and we’ll also recommend if they can be played without parental guidance.

This interactive game takes the “shell game” to a new level. Instead of hiding a bead under a seashell, mixing up the shells, and guessing which one the bead is under, this game uses cups and a fly. The person guessing which player is hiding the fly wears frog eye googles that serve as the timer for the others to hide the fly under their cups. The eyes blink randomly during the hiding cycle and then open fully when it’s time to guess who has the fly. The players not wearing the googles have the objective to “fool the frog” through hiding the fly under their cups and passing it around. Whether you are raising a house full of princes or princesses or some combination, tooting is sure to be a silly subject. The creators of who tooted have taken the fun of a whoopee cushion and turned it into a game. In “Who Tooted”, players hold “buzzers” out of eye-sight of the others. When a button is pressed to start the round, one of the buzzers lights up. The person holding that buzzer presses their buzzer, making the man in the middle of the game “toot”. The other players have to put their vote (a token) in front of the player they think tooted. Hilarity ensues, and sometimes even real toots trump the buzzer fun. (Everyone does it, right?) Have you ever ate so much you feel like your pants could pop? This is exactly what happens in “Pop the Pig”. Players feed the pig hamburgers and then press on the pig’s head the number of times on the selected hamburger. This fills the pig up with air and makes the pig’s belt pop. Greg and I got a kick out of Rooster Race because it was pretty much like some of our favorite adult card games. Bonus, we got to watch Arianna amaze us with her number knowledge. The players each guess if the next card will be higher or lower than the card that is face up…and winning a token (corn, in this case) for correct guesses. Vegas, anyone?