Today marks four years of being a Willis. The man who has made a big smile shine across my face took me as his four years ago today. On our fourth anniversary, I feel 400 times more in love with him than I did that day…and let me tell you, I loved him so much then. 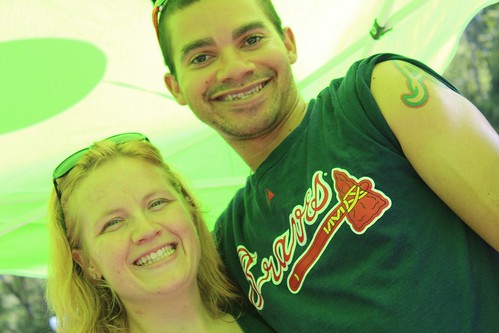 Greg was one of my constants in Myrtle Beach, a good friend who came to the rescue many times. He was quiet, albeit distanced from me, but I hear it’s because he didn’t want to put us in the Friend Zone. Although he sort of tried to go there two weeks after we started dating, he quickly changed his tune when I refused to talk to him for a few days (or was it only hours?).

Within weeks we were visiting long distance. Within four months we were engaged. And 90 short days later, as per his faith gives the minimum engagement, he had moved his whole life to Pennsylvania to be my husband and Arianna’s dad.

I only hope I’ve made every day, even the bad ones, the best of his life in the way that he’s done for me. And one day, hopefully many years down the road, July 11 will not just be four years together but 40 or 50 or 60. We’ll have beautiful grandchildren and our dream house (you know, when Pittsburgh and Myrtle Beach collide). It’s been a beautiful ride, and I look forward to many more years with him by my side.