Our family has some pretty strong thoughts on the importance of pre-school learning. Both of school-age kids attended pre-k programs, and we’re hoping the twins will start in April. Until then, we’re working on some learning activities at home and in the region. (This post contains affiliate links.)

There is some compelling research about pre-school learning. The years before school age are vital to preparing – as a former teacher, I can attest to this! In our house, we are letting the girls explore toys like the Square Panda and Leap Pad to help with letter and number recognition as a starter.

News & Experts shared the information below with me, supporting our thoughts.

Much of the discussion about education focuses on the K-12 years, but some early childhood education experts suggest serious learning can start even earlier and pay dividends for the child in years to come.

“Young children have the capacity at a very young age to be academically challenged, and we need to educate them strongly during those years instead of waiting until they are older,” says Alise McGregor, founder of Little Newtons (www.littlenewtons.com), an early education center with locations in Minnesota and Illinois.

“Children’s minds are like sponges when they are very young. Under age 5 is the most important time for development and our best opportunity to set up children for success. If we strongly educate children at a very young age, while their brains are so pliable, by the time they reach kindergarten, their brain capacity is much higher.”

Recent research confirms that the first five years of life are particularly important for the development of the child’s brain. Harvard University’s Center on the Developing Child reports that in the first few years, more than 1 million new neural connections are formed every second, building the brain’s architecture.

• Socialization. Socialization with people other than the child’s family in a safe environment is an essential foundational element. “It’s important to introduce our children to other children and support their transition into their own friendship groups, and the earlier we do this, it helps children overcome shyness and gain self-confidence,” McGregor says.

• Personal experiences. These assist the brain’s organizational development and functioning in many situations, helping children develop learning skills as well as social and emotional abilities. “A good early-education center creates an environment where imagination, love and innovation all come together for a daily adventure,” McGregor says.

• Enthusiasm for Learning. Lessons can be given in a fun and exciting way that will encourage children to be effective learners. “Feeling inspired and excited to learn takes root in preschool,” McGregor says, “and can last a lifetime.”

• Learning respect for others. A fundamental building block for happiness, friendships and success in life starts early by learning how to share, cooperate, take turns and be nice. “By carrying on conversations, following rules, listening, accepting consequences of actions, the child learns early how to start getting along in the world,” McGregor says.

• Resilience. It’s important that early childhood educators and parents work together to develop resilience in children as early as possible. “By creating a consistent and stable environment with clear expectations and predictable consequences, children can develop skills in managing themselves and their emotions,” McGregor says. “They may experience bumps, bruises or losing a game, but this is the foundation for building coping strategies for greater challenges in life.”

“The first five years of life are the most critical,” McGregor says. “It is far easier to train a child than it is to fix a broken adult.” 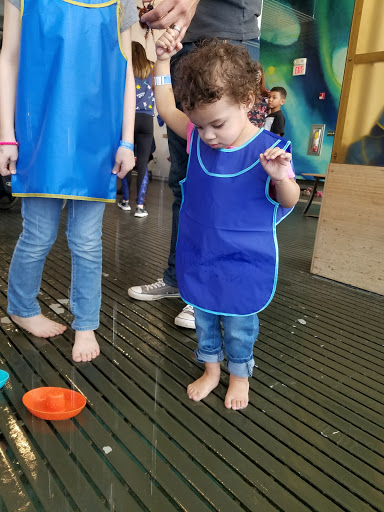 Yesterday I participated in a Twitter party for Trying Together, the Pittsburgh region’s advocates for early childhood education. They are committed to collaborating “with early care and education professionals, families, and other individuals to advocate together, partner together, and learn together, to create a future in which caregivers feel valued; children have access to high-quality, early learning environments; and families have the resources they need to support their children’s early childhood experiences”. If you are in the Pittsburgh-area and are passionate about pre-school learning experiences for our ‘lil ones, engage with them on Facebook or Twitter!

Disclosure: This content has been compensated as part of an Early Childhood Education promotion for Pittsburgh Public Schools. However, all opinions remain my own. #ppsafterschool

What’s the main reason Greg and I maintain a working mom / stay-at-home dad family balance? Because balancing work, child care, and soon school are not the easiest jobs in the world. We’re lucky that I’m able to work to provide for the family, but not everyone has that flexibility. As you know, we went back and forth in the spring about what to do regarding Arianna’s (pre-)schooling, and finally settled in on a public school program that fits our family’s needs.

Our decision would have been a whole lot easier if we lived in the Pittsburgh Public Schools district. Their Early Education Childhood Department “provides children, ages birth to five, with a comprehensive, educational program” with some of the programs being at no-cost to income eligible families.  There’s even a “Ready Freddy” program designed for kids Arianna’s age (4 going on , I mean 5) that is part of the PPS’ “Transition to Kindergarten” outreach. With programs like this, her October birthday never would have been an issue. She would have stayed in the preschool program for ages 3-5 then transitioned to kindergarten in 2014.

(Like any parents, we think our kid is a genius. She went to pre-3 for 2 years at a private school, then we hoped to test her into private kindergarten. The school wasn’t really supporting our decision, so this year she’ll be in a public school program and start kindergarten when her same-age peers do. Let’s hope she can be tested for gifted SOON!)

The Early Childhood Program supports learning at an early age to help children avoid the “start behind, stay behind” paradox. As a former teacher, that’s why I pushed so hard to ensure my kids had access to programs like this. With me spending the majority of my time away from the kids, I want to be sure they have resources to prepare them for school. (Greg is amazing with the kids, but when it comes to working on writing, reading, and math, we agree that we’ll be relying on teachers for help with this area.) If our children have this background, they will start kindergarten at or ahead, setting them up for success down the line (like when it’s time for standardized tests).

Beyond the fact that the Early Childhood Education Program is offered five days a week, six hours a day, includes breakfast and lunch and at no cost for many families, Pittsburgh Public Schools will be offering an incredible win for families of Pre-K to 5th grade students this year–an after school care program. (This is exactly why I fretted so much about school for Arianna, I was going to have to rush around either before or after school to have her in an “all day” preschool program.)

For families with children enrolled in Pittsburgh Public Schools (Pre-K to 5th grade), there are five schools offering this program–Pittsburgh: Brookline, Colfax, Crescent Early Childhood Center, Morrow, and Phillips. Students will be able to enroll in part-time or full-time care (provided until 6:30 PM, daily) at a low cost ($28 per day for 2 days a week to $13 per day for 5 days a week). In exchange, they will get homework help and participate in thematic programming and partnerships with local organizations like the Carnegie Science Center, Gateway to the Arts and Jump Start. The students will be in a safe environment and work on age-appropriate activities.

This sounds like a great alternative to balancing schedules and rushing around at the end of the work day, doesn’t it? For my family, a program that combines the Early Childhood Program and the After School Program would be a huge win. Just enrolling Arianna, we’d get after school care for $13 per day or less than $300 per month. (This would be in addition to the PreK program, which would be at no cost for income eligible families or about $650 for those who don’t meet the income eligibility.) Across nine months of school (since the program runs the school year schedule), the year-long spread of costs would never come close to the impact day care could have on a single income family. Although we chose to go the public school route this year, putting a low cost like this on education would be well worth it, in my opinion–when compared to other high quality programs, the value and cost are so worth it. Especially because the curriculum prepares the PreK students to enter Kindergarten classroom by aligning standards so there’s no gap.

If you have children in Pittsburgh Public Schools and are interested in applying, the application deadline is August 9, 2013 (which is next week!). Applications are available online at www.pps.k12.pa.us/earlychildhood or parents can request a hard copy by calling the Early Childhood Department at 412-325-4291.

I am participating with a number of other Pittsburgh bloggers to write about this incredible opportunity for Pittsburgh families. If you are interested in reading the other posts, I highly suggest searching Twitter and Facebook book for #ppsafterschool for more posts from us.