It’s official. After being invited to be another blogger’s guest at a Hanna Andersson event this week, I have a new addiction. The twins and I? We love Hannas.

We love Hannas so much that I couldn’t stop tweeting and Instagramming about how excited I was to be at their pre-Grand Opening celebration (thanks for the invite, Rachel!). This led to some friends asking me…

I’ll probably make all the VIPs who were in line with me (and were super nice and held Isla for a bit) shake their heads, but I’d never heard of Hanna Andersson until Rachel asked me to go to the event as her guest. Seriously. I’d apparently been living under a rock, because what seemed like over 1,000 other Pittsburgh moms were at the event, hoping to avoid the weekend rush at Ross Park Mall and get some adorable clothing that they’d been ordering online for years now in a brick and mortar store.

Well. Maybe now’s also the time to admit that I don’t spend money on clothes. Legit. Like…if I buy myself a shirt, pants, or dress, they are usually under $20. And the kids? My mom raised me to be a bargain shopper, so spending more than $5 on a shirt or pants for gooey kid stuff to like get on them makes me anxious. So, because I wasn’t at the event on “official business”, I didn’t do my homework before and just figured I’d go, get a free pair of long johns (like everyone else that attended the event, blogger or not) see the store, eat a cupcake, and leave. When I arrived, you can imagine that the budget shopper in me had some sticker shock, but after touching the long johns…I.was.hooked.

First off, the sizing isn’t “Small, Medium, Large”. It’s numbers by 10, because according to their Size Chart:

We still use the European way of sizing by height in centimeters because it’s easy and makes good sense – since every child grows at their own pace all you need to do is measure their height for a good fit.

Then the feel. I want my own Hannas because they are sooooooo (there’s not enough o’s) soft. The seams aren’t rigid. And best off? They are made from organic cotton. (Hence the sooooooo soft.) Good thing they also sell women’s clothing, right?

After standing in line, I got to meet the Director of Stores, Jessica, and she was amazing. Truly. She took Isla and basically gave me and the girls a personal shopping experience. We picked out pajamas for the girls (because they are buy one get one free through Monday, October 12, 2015 at the Ross Park Mall’s brand new Hanna Andersson). While we were looking at pajamas, I tried not to put everything in my bag, but did fall in love with a screen-printed shirt for the girls that then became the inspiration for the clothes the kids will be wearing in our fall family photo.

I was so excited to check out and get the clothes back to show the big kids, but unfortunately there were so many VIPs of past and FUTURE there that the line was a bit long (but customer service was to the MAX). Case in point? I got to meet the CEO, Adam Stone, while we waited (and later he’d come back to talk to us and Ava was super charmed). After that, I asked if I could come back in a little bit to make my purchase (cause the girls needed to eat) and Jessica showed me to their mother’s room. It’s a mother’s room that I NEED in my life. I sat on a padded bench, making it SUPER easy to feed both girls and get back out to the store in no time. I’m so floored by their care for customers that it makes my heart swell. 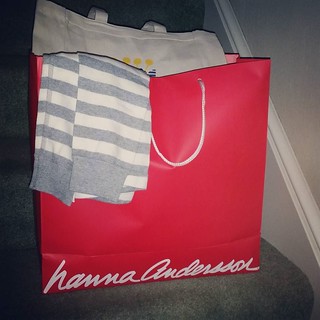 While I won’t be showing you all the photos of the clothes that I bought for the big kids (and they were worth every penny, I tell you), I will show you the twins in their pajamas. When I pulled them out, I was worried because I saw a size 60 is also for 6-9 months, which they are, but they are still peanuts. Luckily, because they are tall, we picked right and they are just too cute for words, right? Thank you, again, to Rachel for the invite and to Jessica, Mindy (Store Manager), Adam, and the entire team that was there to support the opening of Hanna Andersson. You’ve gained a new family to your’s!

If you are in Pittsburgh, the Grand Opening celebration continues from Saturday 10/10 to Monday 10/12 with BOGO PJ’s and 30% off the whole store. There are even some specials for being the first customers through the door those days and the chance to win a gift card (which we all are gonna need now that we can see the clothes in person / for the first time). Swoon. You can find out more about this company on their website, hannaandersson.com, or follow along on Twitter, Instagram, or Facebook with #ILoveMyHannas.

I received product as a guest of Hanna Andersson with no obligation to blog about the event. All opinions are 100% my own.

A few weeks ago, Arianna started weeding through her clothes and piling up all the 3T’s. Sure, most of them are too tight or short, but I didn’t expect her to figure it out own her own. She’s begging for more 5’s because she knows she won’t be four for long.

Before she went to bed, she told me her tummy was too big and she needed to get on the scale. When I asked her why she said because her shirt was too tight and she looked big. It’s starting too young…and Greg and I vowed to make a conscious effort to keep it from growing to where I ended up. It’s not going to be an easy battle, but we’re going to do everything to let her know she’s gorgeous and sized JUST RIGHT (if not even a ‘lil small).

Last week, I was away for a work conference and put together some outfits that actually fit me. I tell you, it does a world of difference when you wear the right clothes, so I guess I understand what she means. Today at work, I wore pants that were too big and a bulky cardigan, making me look a lot bigger than I really am. It’s holding up my self esteem…and then I look at this photo Greg snapped of me before I toured Zappos’ corporate office. 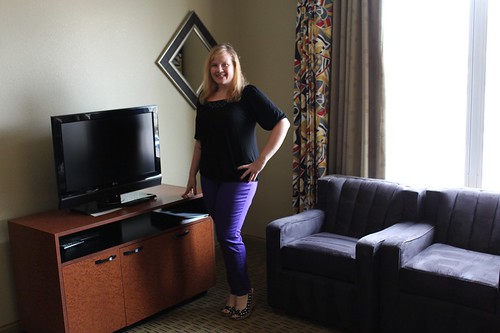