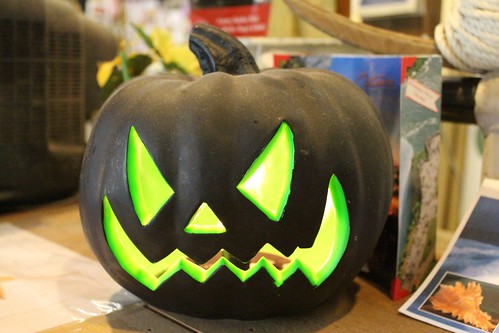 As Halloween approaches, we are cautious with Evan. He’s very afraid of anything mildly spooky, including the neighbor’s (fake) spider web which he helped hang last week.

There are certain stores he won’t even go in, because he’s seen something spooky there. When he does encounter something spooky, he claws at Mama, burying his head. (I really learned my lesson the day I took him in the costume store at the mall to show him the Jake costume and he caused quite the scene.)

It’s a good thing he’s afraid of some things that go “bump”, but I don’t remember Arianna being as cautious as he’s been. And it’s even harder when his sister seems to like the creepy and scary things (like when we went in the costume store and she giggled and pushed the “TNT” button on the clown in a box several times and asked if she could touch a creepy “chucky”-style baby).

Trick or Treat should be interesting. So far, we’ve put off decorating in any way and buying costumes. We allow him to avoid the stores (or at least aisles) when at all possible. Any other tips for helping a two-year-old overcome fears (like that jack o’ lantern above, or plastic spiders)?  Please share in the comments below.