Arianna came home on Friday with homework. “Please have your child practice cutting by cutting one number off Santa’s beard each night until Christmas”. Easy enough, right? This mama got a tad bit nervous–I haven’t had her cut much since the start of this school year and the last time it wasn’t very pretty. The numbers on Santa’s beard aren’t separated by much, but I figured you can’t tell unless you try.

So, we hung Santa on the fridge with “Freddy the Frog”. (I am not sure where the teachers got this idea, but I love this alternative countdown to Christmas as I am not a huge “Elf on the Shelf” fan and the kids can’t eat the chocolates in a traditional advent calendar!) 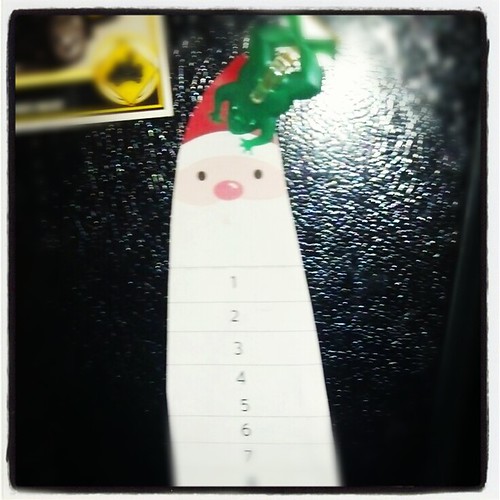 Since Arianna and ‘lil Man were with Pappy and Grammie for a Christmas party this weekend, we had two days to cut off last night. Arianna got super excited and asked me if she could cut Santa’s beard before supper. I set her up with scissors and modeled the first cut. I think she rolled her eyes.

I handed her the scissors and then turned to look at something else. Her small hand met mine and she placed the “23” in my palm. It was cut out right across the line! Phew. 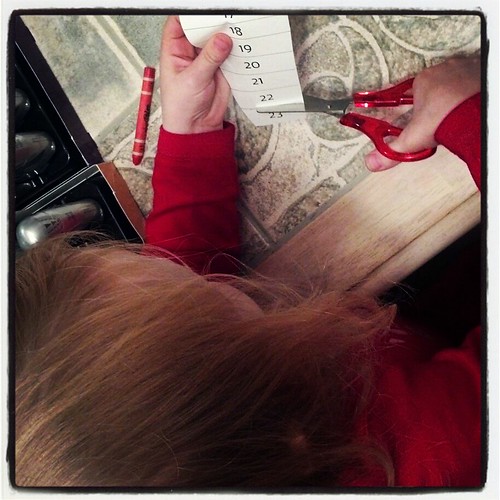 The side story of all this is perhaps the sweetest piece. ‘lil Man thinks that he can (and should) do everything that Arianna does. Greg was trying to keep him out of the kitchen and away from a tantrum. When Arianna and I went to the living room, ‘lil Man darted into the kitchen, screaming “Shave! Shave! I wonnnnaa shave!”.

I got nervous for a moment because I have a friend whose 4-year-old son recently shaved his head with a razor just before his birthday. History can repeat iteself, and I have yet to have his “two” photos taken, so I went to run after him. When he pointed to Santa,  I breathed a sigh of relief and realized he wanted to help Arianna shave Santa’s beard. Who knew?