If you follow along over on my personal Twitter, you’d know that I was just a little bit beyond irritated last Wednesday evening. The time was set for me to have some ME TIME. I decided that returning one non-working toy would be a simple fix, so I headed to Monroeville to exchange a toy bought on line.

After waiting about 20 minutes in the customer service line, I find out they don’t have the like item in stock (although it said they did online before I left). They decided to put in a call to the Ross Park store and see if they had one in stock (since the computer said yes). The super kind lady behind the counter waited on three other customers while waiting for someone to answer. No one did, so I decided to get my butt in the car and cruise across town and give it a try.

Thirty minutes later, I found the identical toy on the shelf and was upset to find out that the lantern was also broken in that one. Taking both to the (empty!) customer service desk, I tried to work out an alternative with the employee. There may have been another lantern (without the extra items) somewhere in the store. Sadly, it didn’t turn up. I asked if we could test and exchange the batteries. They didn’t have the right screw driver and said I could try to use a smaller one, but if I broke either toy I’d be responsible for damages. I gave it a shot, then they didn’t have batteries to test OR buy. Ticked, I just stood at the counter as the line grew five people deep. I stared, silently. Finally, after about three minutes, I asked, “Do you think it’s an issue that your store sells broken products and doesn’t sell batteries for the toys they sell?”. The response was, “No, a working toy is your responsibility. You shouldnt’ve bought it broken”.

The problem?!?!? I DIDN’T BUY IT BROKEN. It was shipped to me broken. NOT MY CHOICE.

Pushing tears back, out the door I went and dialed customer service. I waited 16 minutes before anyone answered. When they did, I got the same story PLUS a “if you want to return the toy to our distribution center, you can, BUT you are responsible for shipping and this toy isn’t in stock so you’d only get it back IF ANY EVER COME BACK IN”. Really? Yes. You really expect me to cause my two year old to cry? Well then. I asked if they could send me batteries. No go, they don’t sell them. Seriously?!?! I asked, “Do you care that you just lost a loyal customer over a $12 toy and 3 batteries?”. They answered, “No, have a good night”, and the call was done.

Okay, I went crazy mama for sure. But, the toy only was defective because the batteries didn’t work. Greg found some for $12 (the cost of the TOY!) but I was able to score a 10-pack for $6 on Amazon. Guess what? They arrived on Friday and worked. The toy was fixed. 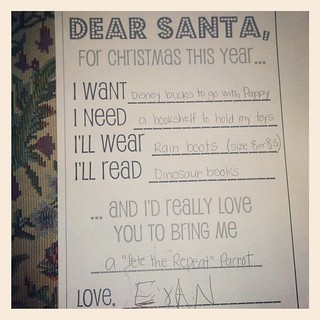 Okay, so the lantern wasn’t on the list, but he did verbally say he wanted one, like his Pop Pop had. And, he got every thing on that list except for the parrot (another battery fail at a small mall toy store, don’t get me going). Instead, he got this sweet rabbit that does the same thing. 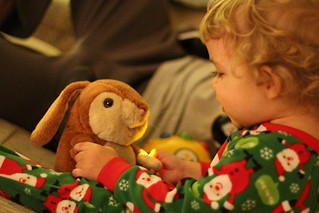 And you want me to get back to how Santa lost? Alright, alright. (Sorry, this turned into a “Greg Story”–oh, you don’t know what that is? Let me tell you about the time I sat on the dock and listened to him tell the story of the ants sometime.)

Here’s how Santa lost. Go ahead, laugh. He could care less about the damn lantern, thanks to having a multi-tool like Unca’s. Rawr. 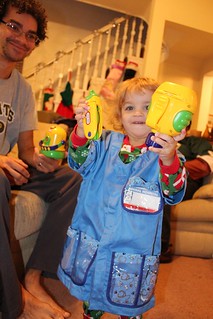 One thought on “How Santa Lost (Sort Of)”