You already know we did it, Mud on the Mountain at Seven Springs. Not only did we do it, but we crushed our fears and came out smiling. 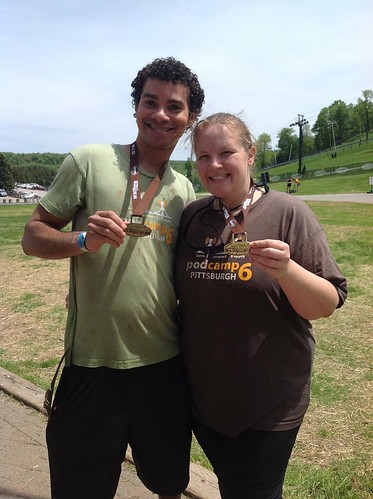 On May 12, Greg and I put on our old shoes, PodCamp shirts, and ate a big breakfast before embarking on our adventure. We met up with some of my work friends and made it to the Start line just before it was time to hit the hills.

A quick huddle, a countdown, and off we went. Everyone left the gate running, but we quickly had to go it slow up the first of three big hills (ski slopes). Not going to lie, I walked most of that hill. My knee kept slipping and I definitely shed a few tears. I was next to last to get to the top and HATED that I was holding everyone else up, but was so proud I made it up without turning around.

(Note, the following four photos are proofs from the Mud on the Mountain official photos. I did not have a camera with me, so these have to do!) 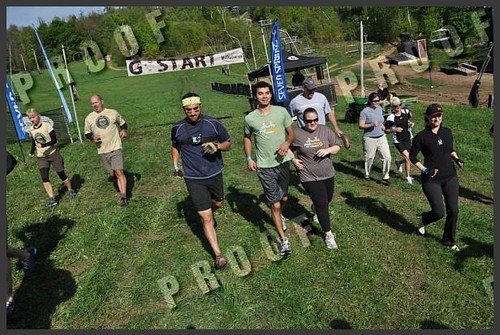 The first obstacle was waiting for us, the Spider’s Nest (a big cargo net to climb up and over). I got two rungs up and the knee. THE KNEE. Ugh. A co-worker said it was ok, go around, and I did. But I looked back and saw the guy who was behind me coming up the hill struggling with “to go on or not to go on”. There was no way we were letting him quit, even though he was a complete stranger. Greg talked to him and convinced him to go on with us. Our group broke up at that point, but we were ok with that. It was Greg, S, P, and myself against the mud and the mountain.

Over the next four hours (hey, next year we’ll be cutting a good amount of time off that, trust us!), we went through 19 other obstacles, climbed several small hills and two much larger, steeper ones. We didn’t get as muddy as we expected, but it was still fun to get a little bit dirty.

Although I was slightly scared of the “Cheese Grater” (appropriately named, there were rocks under the “waterslide”), but P took that slide like a champ, so there was no fear to be had here. The funniest part of the day is when S and I got to the end, we didn’t slid down the small hill to get off the slide and ran into each other, collapsing in giggles.

We climbed a hill, then just when we thought we were at the top, we hit the “Baby Crawl”, a very steep incline to climb up. I gloated, climbing the whole thing without using my hands…until I got to the last 6 feet of it and hit a mud spot. BAM! Down on all fours and had no clue how to get up. The great thing about endurance runs? Everyone is helpful. A kind stranger reached out his hand and helped pull me up. Phew!

One of my favorite obstacles was next, a belly crawl through mud. I did “reverse” snow angels in the mud, saying, “Who needs the spa when you have this?”! Next was a water obstacle, “Dunk, Dunk, Goose”. We had to go under three barrels that were floating in about 3 feet of (frigid) water. I had severe ice cream headache and charged out of there when the photographer caught this one: 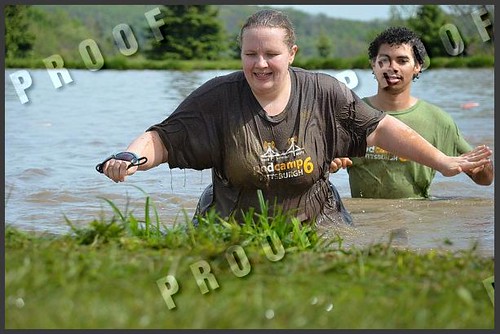 Next was one of our least favorite obstacles, basically a log jump and duck…but with mud and spraying water. Greg was a trooper, helping all of us over and under and he got water straight in the eyes several times. Boo! 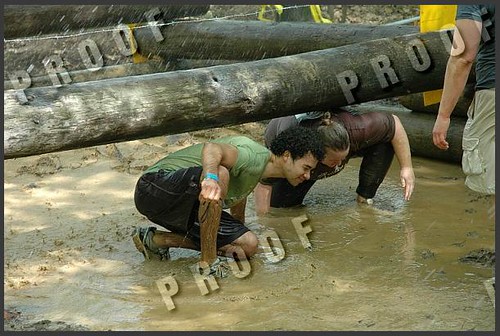 Several other obstacles including a boulder climb (I took the HERO path over the ZERO), tires, a wormhole (this one tore up the elbows!), water, and a muddy downhill slope faced us. I hated that slope–it scared me because I didn’t want to slip! We made it to the trout line and had to cross 12 feet deep water stretched out like meat left to dry on two ropes. The problem was that Greg happens to be pretty tall, so he pulled the rope a bit more stretched than I did, but my body had to account for his. I wore a lifejacket because I didn’t want to get a charlie horse while crossing that water, and although I felt like a dork, I was glad for safety first.

We climbed the largest, steepest hill of them all, then ran through wet, soapy trailers, over 8 foot walls (ok, not me, but you should have seen Greg jump it!), over a hay bale, and into a dumpster of ice water. The final quarter mile was down hill…this girl sat on her butt and slid so that I didn’t bust a leg that close to the end.

Ok, maybe the last obstacle was my least favorite. We had to climb a 30-foot mound of snow, and I just really wanted to give up and go around it. Greg pushed, I pulled, I crawled. We posed. Then I froze up. 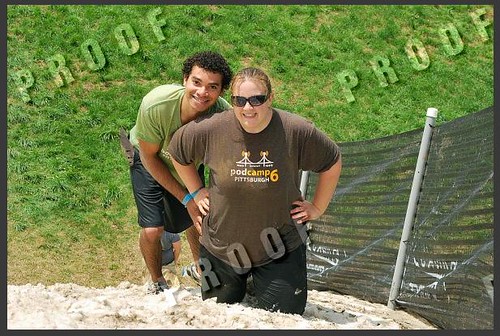 I was at the top, but I had NO desire to get down. Bring in the helicopter! Nope. Not an option. I cried a little bit, but Greg promised to slide down the hill ahead of me and help control my speed. It was scary (I try to stand up on roller coasters, so you have to imagine I was scared of this icy slide), but I did it! We crossed the finish line with smiles, grabbed our medals, and started cranking the Gatorade.

It was a beautiful day, a great adventure, and we will definitely do it again! It’s great to think about where I was before my whole journey to better health began, and I never would have imagined doing this event (or running a 5k the next weekend!). What a blessing it was to have this experience and have a great team by my side to complete it! Thanks Greg and S, and we’re so proud of you, P! 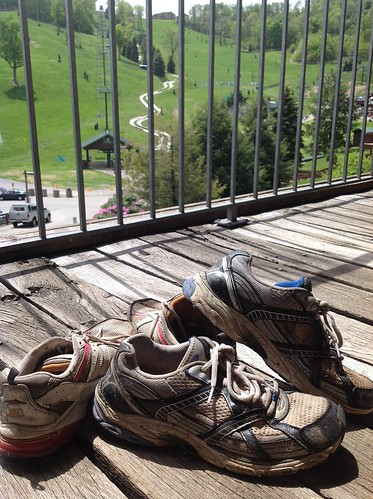 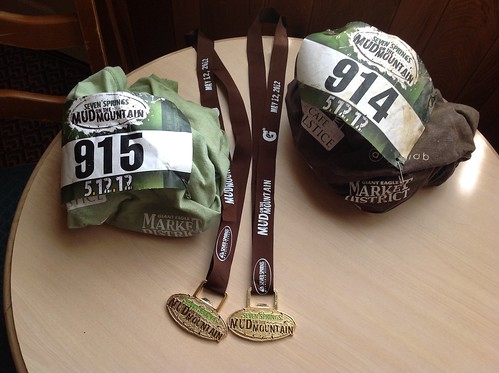 Our shirts, bibs, and medals…well earned!